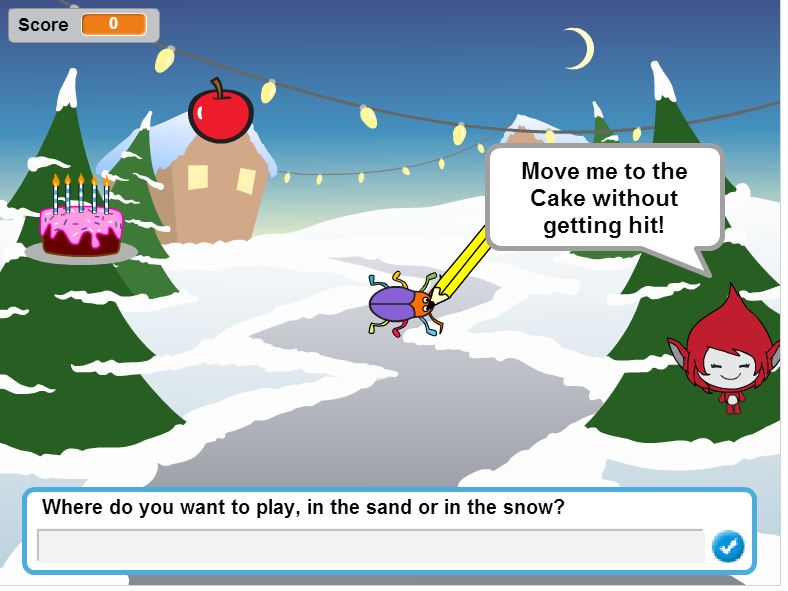 Students at St. Andrew’s Episcopal School in Austin and partners in Pakistan collaborate on video game design to make adventure games like the one above.

I recently wrapped up teaching an eight week course in Global Video Game Designers at St. Andrew’s Episcopal School in Austin, Texas. During the class, we covered many exciting things and had a blast sharing our ideas with each other – and our Global Partners in Pakistan! Throughout the course, we focused on game design fundamentals, programming logic basics and the importance of collaboration and communication.

During class, we began scratching the surface on what it means to collaborate at such a high level, and why this teamwork is critical for success.

The 2nd-4th grade students in the course were all self proclaimed “gamers” and were eager to start creating their own. Channeling their excitement was one of the more challenging – yet rewarding parts of the class!

As instructed, the students quickly listed and described some of their favorite games. As they did, I encouraged them to think critically about why these games were so appealing. Through this process, the students began understanding what helps create engaging games, and how to apply this newly found understanding to ideas of their own. I was impressed by how quickly the students described ways in which specific game mechanics may positively or negatively impact an experience.

One of the biggest components of game design and development is collaboration. For Triple A game development, teams of artists, designers, engineers, writers, producers, etc., come together to establish a vision, and guide that vision through to completion. During class, we began scratching the surface on what it means to collaborate at such a high level, and why this teamwork is critical for success.

The idea of effective collaboration was reinforced each day as the students exchanged video letters with their Global Partners in Pakistan!

The idea of effective collaboration was reinforced each day as the students exchanged video letters with their Global Partners in Pakistan! The students discussed their interests, described concepts like debugging, creating variables and game balancing. In addition, they were excited to learn about daily life in Pakistan, while sharing what life is like here, in Austin! Things like holiday celebrations, favorite foods and even types of clothes were discussed.

Students in Pakistan shared their aspirations and interests in the U.S. via video message exchange with their partners at St. Andrews Episcopal School.

To create projects, and understand development, we used the elegantly simple, MIT developed software, Scratch. Scratch allowed us to manipulate pieces of code, implement our own logic and create animations. The software helped us apply our learnings about game design, and helped the students see how the code behind games helps run the show. Together, we re-created classics like Pong, prototyped a choose-your-own adventure game, created a musical keyboard using the laptop’s keyboard and more!

Together we learned so much from the curriculum and each other. It’s important to introduce young minds to STEAM related areas of study early. This allows them to familiarize themselves with the possibilities these areas provide, and helps them realize their own interests. Perhaps one day students from this class will create amazing games that will change the world!

Together, the class recreated and played the classic game of Pong using Scratch as part of LUV’s Global Video Game Designers.

See these other articles by Jake Parmley: