Leveling Up with Global Doctors DNA 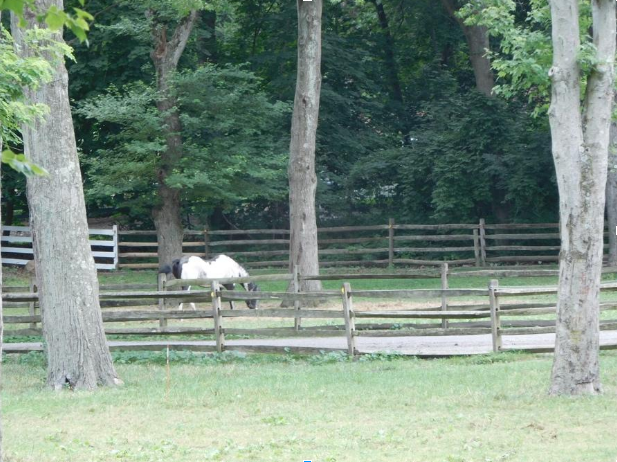 Bucolic countryside on the way to Portledge School.

This summer, I had my first opportunity to teach a Global Doctors: DNA class for Level Up Village at Portledge School in Locust Valley, NY. Every morning, I got to drive past idyllic stretches of farmland and a ranch filled with horses on the way to school. This was the area that inspired F. Scott Fitzgerald when he wrote “The Great Gatsby,” so miraculously, the science, video, and literary geeks in me were fulfilled all at once!

Portledge Summer Adventures engages students with a variety of science classes for all ages ranging from five years old through high school. The Level Up Village course, which included the exchange of video letters with partner students in Ghana who were also learning about DNA and its structure, was a unique opportunity for the students at Portledge and I was excited to begin. Due to previous science opportunities, the kids were coming in with a strong background for what they were about to learn. This was going to be a smart group! 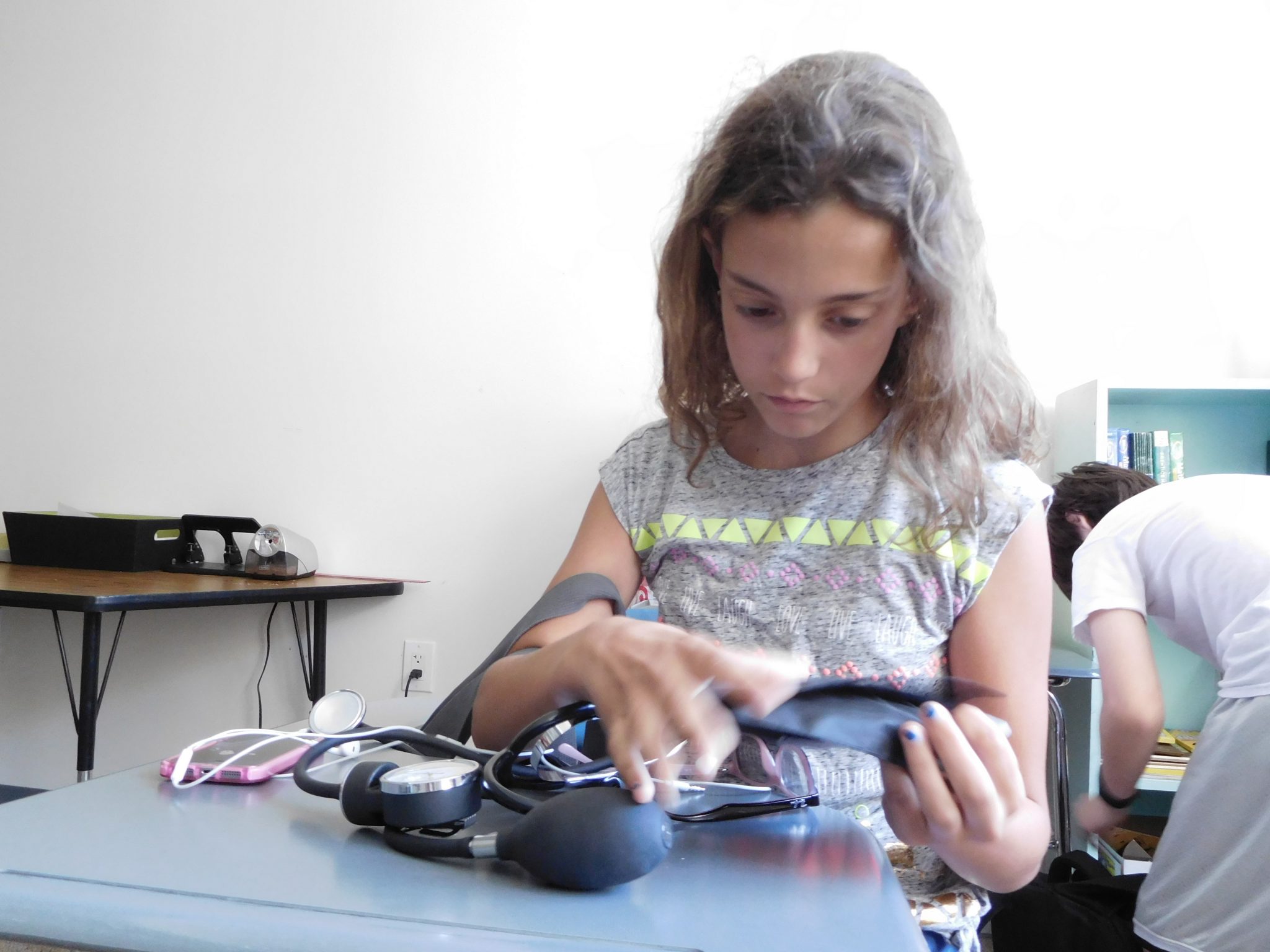 Learning to use a sphygmomanometer in Global Doctors: DNA at Portledge School.

In preparing our twizzler-gumdrop double helix exercise, not only did most of them already know the Adenine-Thymine, Guanine-Cytosine nucleotide pattern, but our youngest, the 7-year-old, calmly explained that in RNA, Thymine is replaced by Uracil. That was supposed to be the final day’s material! Still, there was plenty in the lessons they needed to learn.

Ok. So I had a question for them. What was the advantage of a twist in the double helix? One 12-year-old guessed correctly: maximizing space for DNA within the nucleus. After that, each child was able to repeat the answer to this question, reinforcing it by demonstrating the twist in their self-constructed helixes. So we did fine with DNA structure – though often, they were tempted to eat their lesson materials. 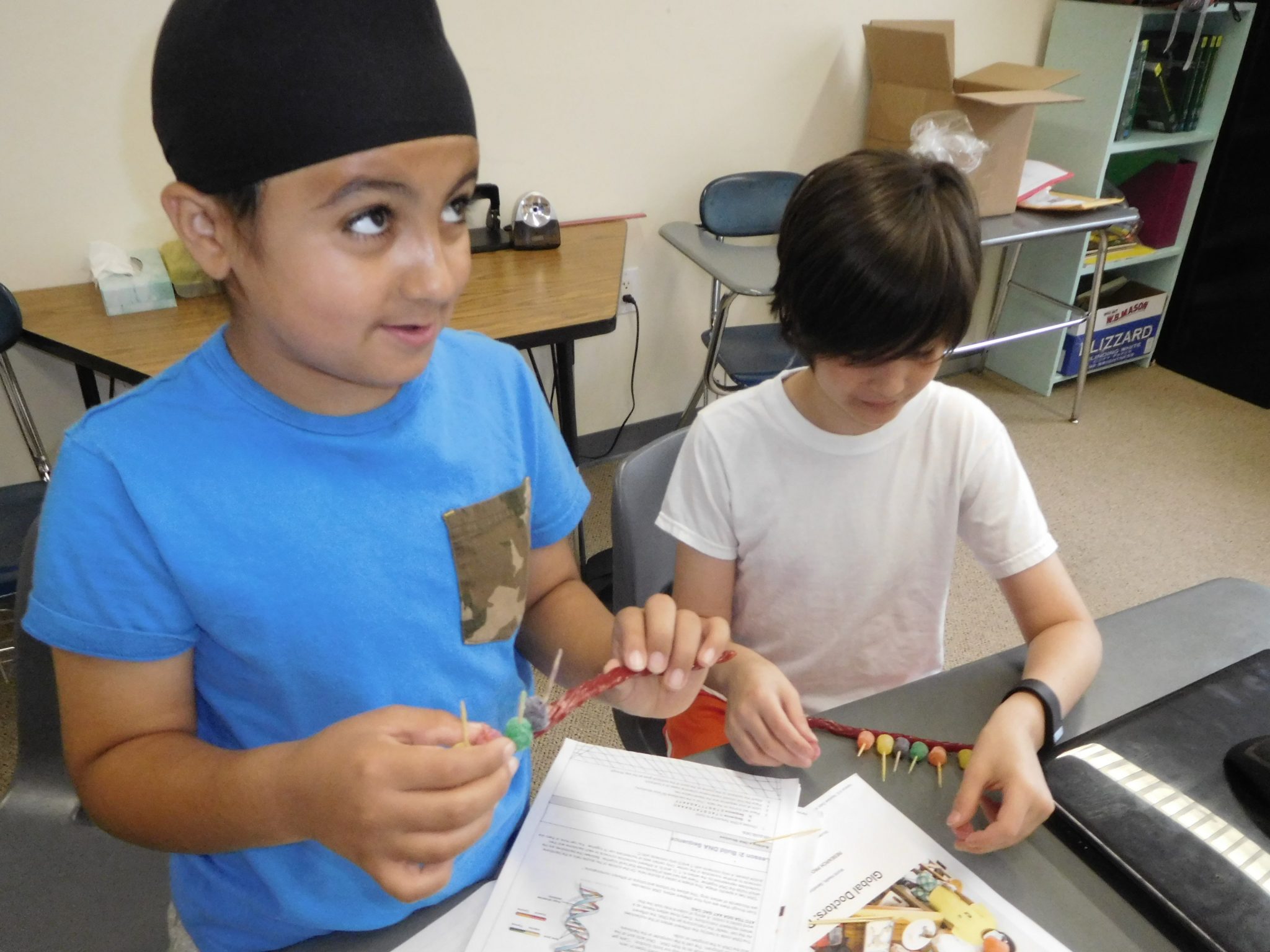 During one lesson, students at Portledge School constructed a model of DNA strands out of candies to better visualize the double helix.

When studying ‘environment,’ I asked them to tell me the source of global warming. They called out: “Smoke!” “Cars!” “Coal!” “Factories!” “Smoke!” “Nuclear!” Well, nuclear is considered to be a ‘cleaner’ energy, I explained. That drew some questioning looks. We drew all their answers on the board and connected them so they could be reminded exactly why residences and industry end up being the biggest source of emissions. One student said, “My dad has a printing press. So I’m going to tell him to close it down.” Another asked, “Why do we have to be civilized?” Then they all ran up to the SmartBoard calling dibs on their “Tiny Houses” of choice.

Just before the lesson on respiration and circulation, they proved that they understood why the Amazon Rainforest could be considered the “lungs” of the earth. And since our Global Partner, Ghana, was in Africa, what body part could Africa be? One answer was the “heart,” since the equator running through the center makes it a central receptacle of sunlight, energy, and life.

Students sent and received three video letters to their partners in Ghana during this week-long summer enrichment course.

This was also a focus of our video letters with our Ghanaian partners from Exponential Education, which we all watched together on the big screen. I was impressed by all the obvious ‘mirroring’ that occurred from one side to another. If one student looked tense, their global partner would mirror it – drawing attention to, and allowing the other person to deal with it. When one of our students had his sister pop into the frame behind him, automatically bringing out his playful side, his Ghanaian partner followed suit by having his own brother playfully pop into the frame. And when we chose a more comforting open-air angle of the school for our background, the Ghanaians did the same. 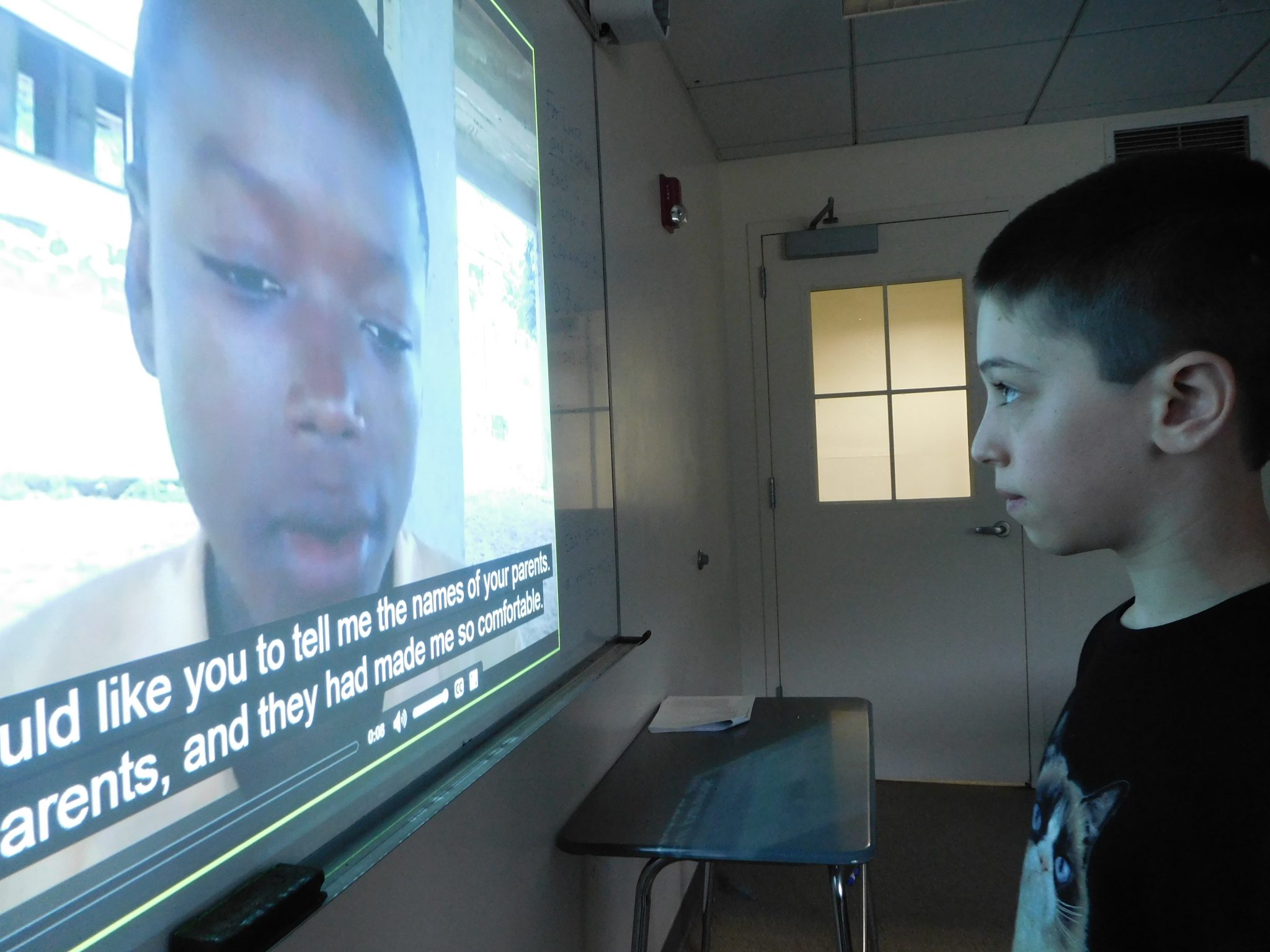 The students on both ends of the collaboration improved their quality of their video messages over the course of the week by making eye contact, speaking at length and personalizing their messages.

By the third day, our kids knew that what made us feel in the moment were videos that utilized more of three things: eye contact, speaking at length, and personalizing – by saying a partner’s name, and by really responding to what they had said. This became our focus going forward. We talked about how effective communication was something they had the power to model, as well as reflect back.

After our class was done, I realized that throughout our lessons, there was one thing that made the kids deeply quiet, attentive, and pensive – immediately. This was when someone would mention an experience of real illness among people they knew – whether it be dementia, atrial fibrillation, or a surgery. It was very touching to realize how sensitive and respectful the children were when it came to these problems. More importantly, it was very clear to them that DNA research was one possible solution. And some of them are already considering being part of that solution in the future! 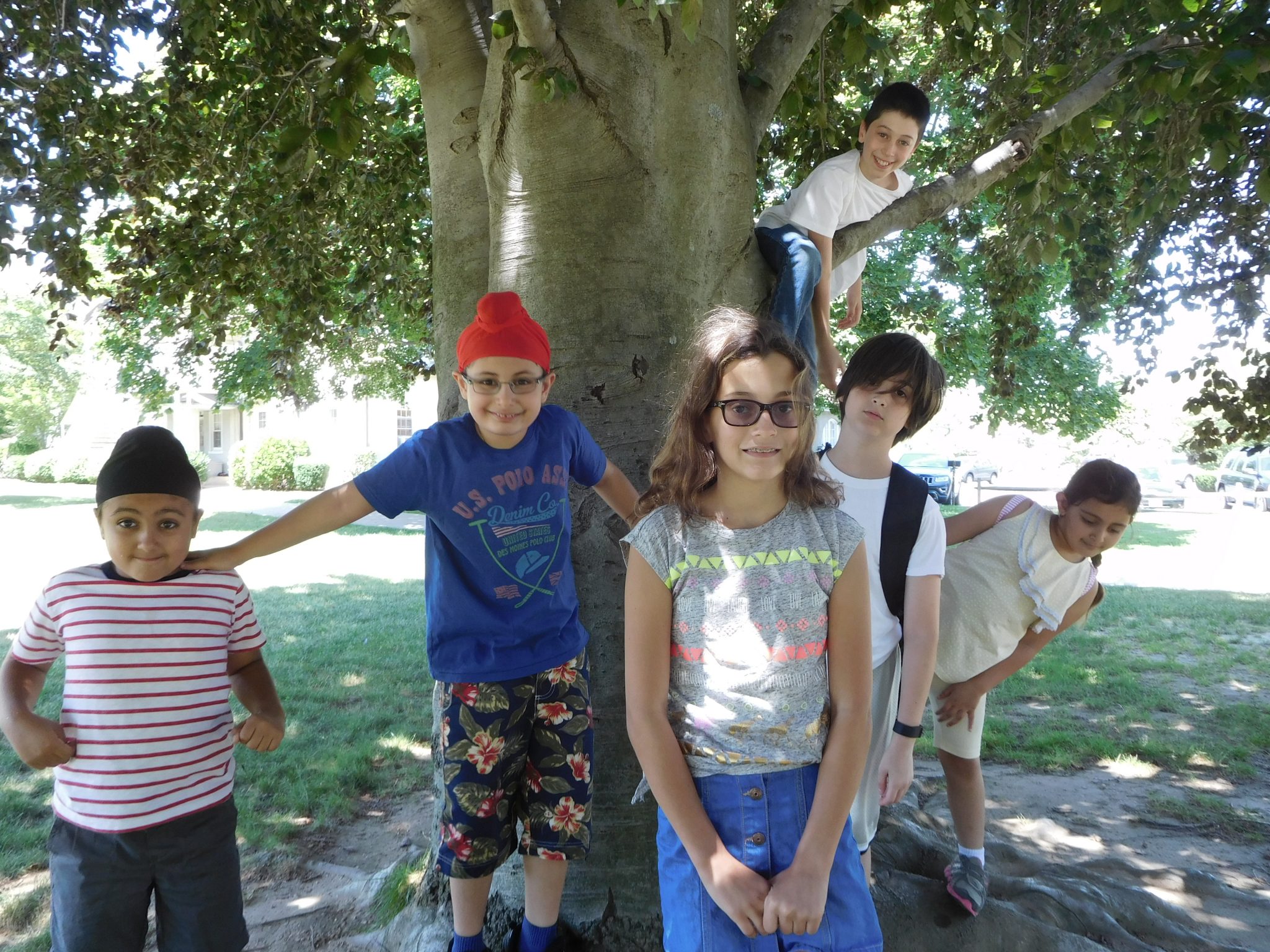 These curious students at Portledge School came to realize the importance of DNA research in addressing health issues such as demential and atrial fibrillation.

Wendy Cheng: Wendy is a teacher, writer and filmmaker who has been working on a narrative script about the environment and is also considering doing a study of world literature and the environment.

We'd LUV for you to join the conversation:

Your email address will not be published. Required fields are marked *