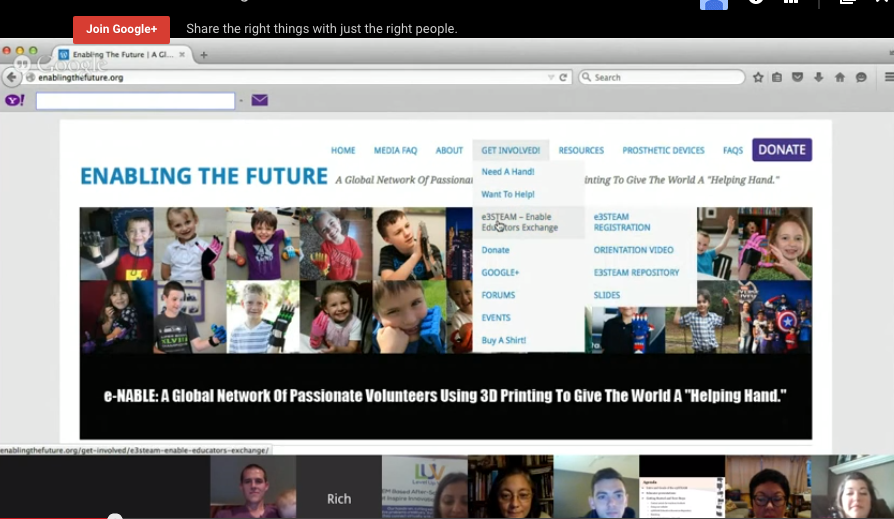 Level Up Village Co-Founder Neesha Rahim was one of several presenters at the e-NABLE Educators’ Exchange (e3STEAM) kickoff on August 26th. Open to the public, the virtual Town Hall was broadcast via Google Hangouts and brought together educators and 3D printing enthusiasts to celebrate the 3D printed prosthetic movement and share e-NABLE inspired ideas, experiences, curricula and best practices. Rahim discussed LUV’s pioneering global STEAM programming, including its Global Inventors/3D printing course, which has created a globally distributed network of nearly 30 3D printers and trained teachers at U.S. schools and Global Partner organizations in developing countries.

“Level Up Village is actively involved with using 3D printing for social good, and we were delighted to join like-minded educators at the e3STEAM kickoff. In our Global Inventors course, U.S. students collaboratively design and 3D print solar-powered light sources with partners in developing countries for use in their energy poor communities,” said Neesha Rahim, Co-Founder, Level Up Village. “Our next step is to empower our network of school partners to access e-NABLE’s free curricula and resources so they can use their 3D printers to make prosthetics with e-NABLE.”

Level Up Village courses promote design thinking and one-to-one collaboration on real-world problems between K-9 students at more than 50 schools in 12 states and students at over 30 Global Partner organizations in 19 countries. All schools that enroll in LUV’s Global Inventors course receive a free 3D printer, plus fully developed curricula, teacher training in CAD, basic electrical engineering and printer operation, as well as experienced management of the global collaboration process. U.S. school partners directly sponsor Global STEAM education in developing countries through LUV’s “take a class, give a class” model: a portion of the tuition is used to deliver the same class  to students at one of LUV’s Global Partner schools, many of whom are living on less than $2 a day.

The world’s largest and most active open source prosthetics community, e-NABLE has catalyzed a global network of more than 6000 volunteers worldwide, including makers, designers, engineers, artists and kids to use their 3D printers and design skills to create free 3D printed prosthetic hands, with the goal of providing them to underserved populations around the world. The organization recently received a $600,000 grant from Google.org to support the mission of the e-NABLE community.

The e3STEAM kickoff was moderated by eNABLE Educators’ Exchange Coordinator Rich Lehrer, a National Faculty member for the Buck Institute for Education and an eighth grade science teacher at Brookwood School in Massachusetts, who has involved his students with 3D printing e-NABLE devices for his son.

“The goal of e3STEAM is to empower young people to become agents of positive change in their own lives and in local and global communities by virtue of their involvement in the building and receiving of 3D printed hands. By doing so, we will provide them with an inspirational 21st century model of the power of collaboration, creativity, critical thinking, service, and technology,” said Rich Lehrer, e3STEAM Exchange Coordinator.

Participants in the Hangout were familiarized with the goals of the e3STEAM initiative, heard from experienced educators who have involved their students in eNABLE’s mission of 3D designing and printing low cost mechanical hands and disseminating them to those who need them, and found out how they can join the movement.

The e-NABLE community is an open community founded by Jon Schull in 2013 to crowd-source the design, fabrication, and dissemination of 3D-printed prosthetics for children and others missing fingers or hands  The volunteer community has grown continuously since then, and has already delivered hundreds of devices to  recipients in at least 37 countries.  The Enable Community Foundation was founded in October 2014 to support the mission and operations of the e-NABLE community.  The community’s public-facing website is http://enablingthefuture.org.  Their nexus for collaboration is a google plus community with thousands of members, at http://bitly.com/e-nable. More information about obtaining a device, volunteering, partnering, donating, or sponsoring can be obtained by emailinginfo@enablingthefuture.org.