Inspiring a Love of Biology in Today’s Global Classroom 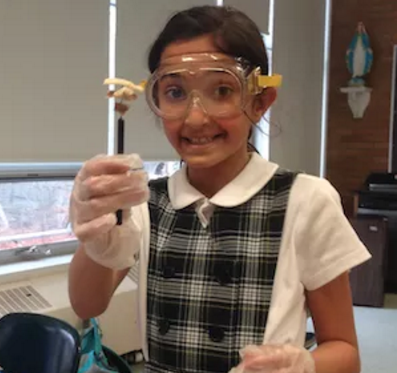 “How do they breathe?”

“How long is a frog’s tongue?”

“How does a heart work?”

“Why do we have kidneys?”

Students recently asked these questions and many more while participating in Global Doctors: Anatomy, a Level Up Village after school course at St. Thomas Aquinas Catholic School in Fairfield, Connecticut. Teacher Nan Van Ryzin explained that children are natural scientists from an early age.

“Children will sit outside in the dirt or streams while observing and gathering worms, caterpillars, grasshoppers, frogs and even snakes. Many will try to catch specimens in jars, attempt to give them food and keep them as pets,” said Van Ryzin. “They are curious, thirsty for knowledge and motivated by a strong desire to learn about the beings that they encounter.” 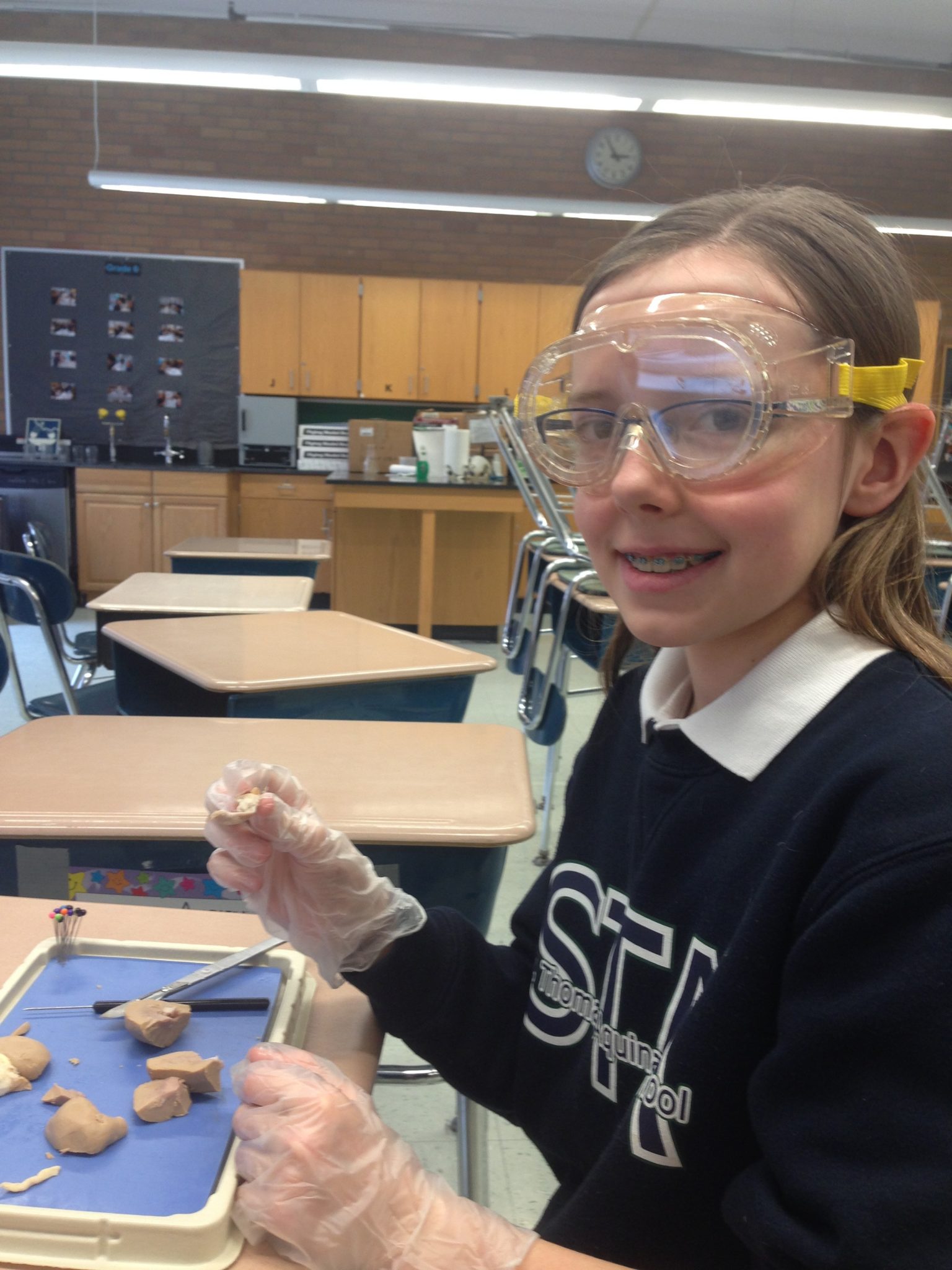 Students at St. Thomas Aquinas Catholic School in Fairfield, Conn., dissect a sheep’s kidney during the after school program in their after school course: Global Doctors: Anatomy in their global classroom.

Global Doctors: Anatomy taps into this natural desire to explore and learn. In the course, students dissect and look inside various animal specimens to learn about bodily systems including the circulatory system, the nervous system, the digestive system, and more. Initially the students were somewhat intimidated by the specimens, but not for long.

“With guidance and reinforcement they became extremely excited upon finding and labeling the many parts and functions of the external/internal organs. This intrinsic satisfaction fostered further curiosity which lead to questions and deductive reasoning such as, ‘This part of the sheep brain is not developed because sheep do not have language.’”

In one dissection, students learned that earthworms play a very important role in the ecosystem and that the entire function of the earthworm is to eat and filter organic substances to create fertilized dirt. In fact, the more earthworms one finds in soil the better the soil is. They were astonished to discover that the intestinal system occupies most of the worm’s body.

“One student said, ‘Oh my gosh! Look at this! The earthworm’s intestines are filled with dirt!” said Van Ryzin. “Students were also intrigued by the fact that earthworms are both male and female and create their own offspring and that they breathe through their skin and have no lungs.” 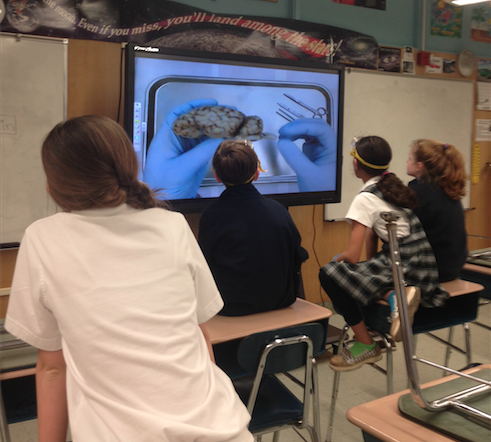 Multimedia is integrated into each Level Up Village lesson with videos such as this one to prepare students for the dissection of the day. These are shared in their global classroom.

While dissecting a frog, students were in awe of the upper legs’ muscular system..

“They began to understand how the upper leg muscle is very large and developed for propelling the frog to jump very high and far. They were also very surprised to see the size and color of the muscle,” said Van Ryzin.

During class, one student called out, “Some people eat frog’s legs!

Another exclaimed, “If we eat meat or chicken, we are eating the MUSCLES of these animals!’”

Students were also fascinated by the fact that the frog’s tongue is attached in the front of the mouth instead of at the back like humans.

“The children experimented with manipulating the tongue to see how it goes so far forward out of the mouth to catch insects,” said Van Ryzin.

Each class period, students discussed what they learned with global classroom partner students at RIC-NET in Uganda via video message exchange. This cross-cultural connection had a profound impact on students.

After each dissection, students shared what they learned with their global classroom partners at RIC-NET, an organization dedicated to empowering  students in Uganda. They used Level Up Village’s global communications platform to send and receive video messages.

“The students realized that their partners’ lives were very different from their own on many levels. Within the partner country, there are many tribes and many different languages spoken within each tribe. The students correlated this to their own country and imagined what it would be like to travel to New York, where people spoke a different language,” said Van Ryzin.

“Rarely, do we have the opportunity to engage with, share and learn about culture from a person from a different country,” said Van Ryzin. “The global partner connection does just this!  The opportunity to share with an Ugandan student ‘face to face,’ via technology creates a reality that cannot be met with the written word.”

In addition to studying various body systems, students explored a health concern faced by their global partners. In this case, it was malaria. Some of the Ugandan students explained in their videos that they go to the doctor frequently to be checked for the disease.

“My students asked lots of questions such as: ‘What is malaria?’ ‘Do we get vaccinated for this?’ ‘How do you get malaria?” said Van Ryzin.” I supported, encouraged and made time during class for the students to initiate research to find the causes of malaria. The students became quite somber regarding their findings.” 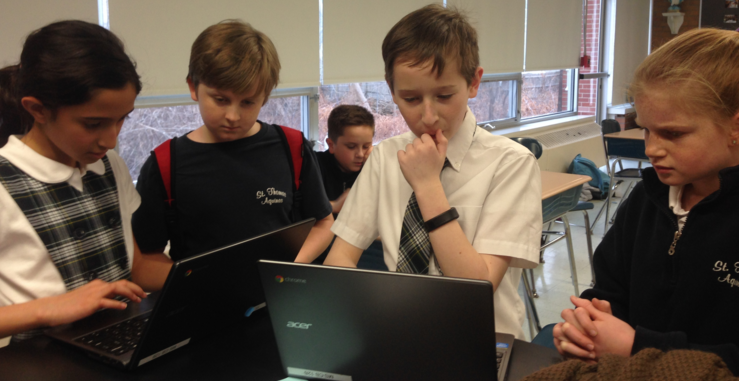 As part of the course, students conducted research on global health issues such as malaria, which affects their global classroom partners’ daily lives. They were sobered by their findings.

Her students told their Ugandan partners that in the U.S., one of the most prevalent diseases is heart disease. They then they dissected a sheep’s heart and were joined by parent who teaches dissections at Sacred Heart University. Students came back the following week with new insights.

“They came to their own conclusions that heart disease may be preventable through exercise, eating well and not eating processed foods,” said Van Ryzin. “One joke that prevailed was that the packaging of the processed foods may be more nutritious than the contents!”

One student said, ‘“It is good to exercise our own body muscles, so exercise must be good for the heart because the heart is a muscle.”

Throughout the course, the students developed not only as scientists, but also as global citizens.

“Rarely, do we have the opportunity to engage with, share and learn about culture from a person from a different country,” said Van Ryzin. “The global partner connection does just this!  The opportunity to share with an Ugandan student ‘face to face,’ via technology creates a reality that cannot be met with the written word.” 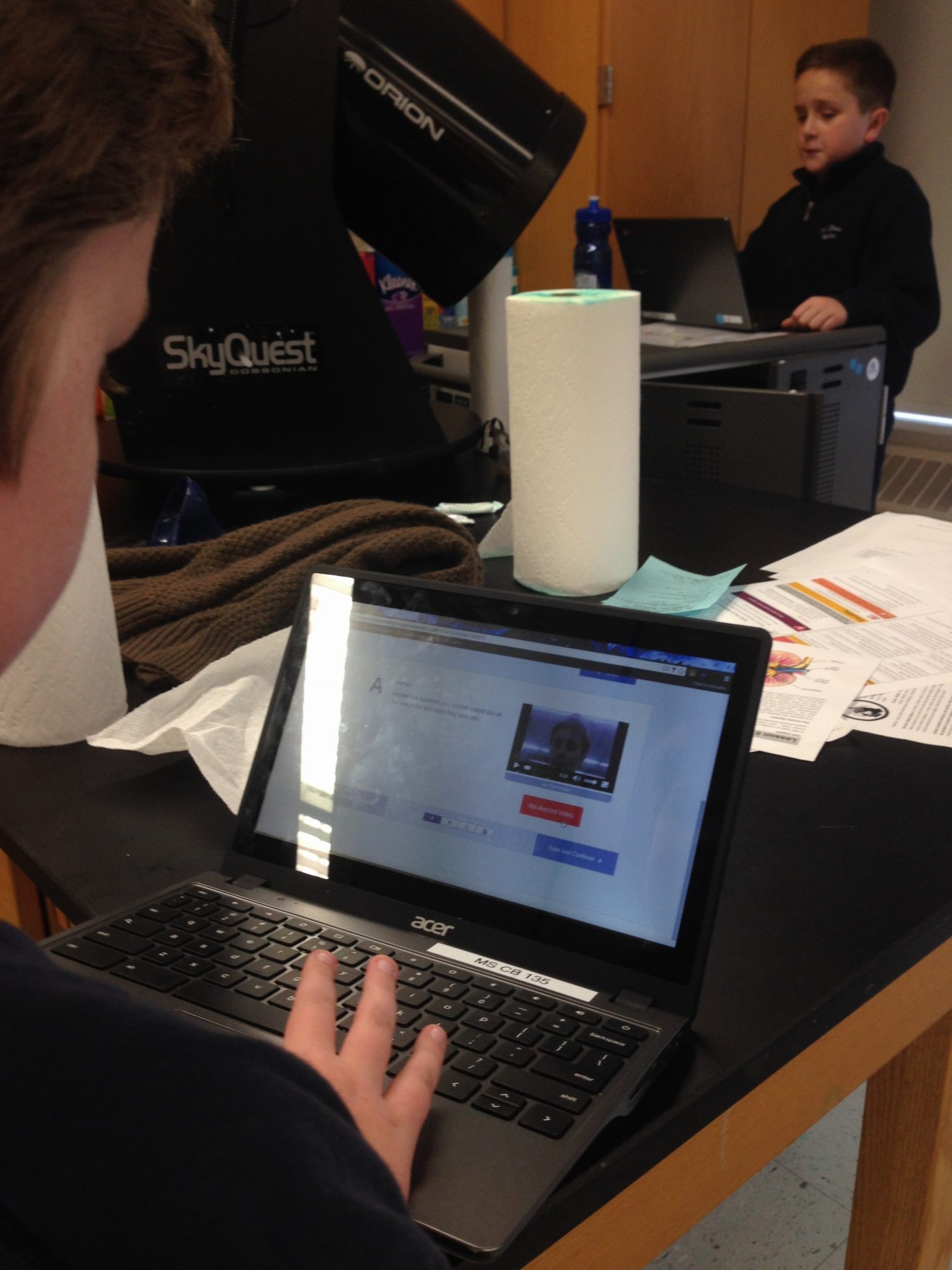 Students record their video messages back to their global classroom partners in Ghana at the end of the class period. The guided exchange of video messages creates meaningful connections and authentic global learning opportunities for students on both ends of the collaboration.